I had the loveliest day recently. Judy Newman of A Very Fine House came down to the Peninsula to run a class on making her beautiful Museum Medallion quilt at Treehouse Textiles. I had been looking forward to spending a day at the Treehouse since it opened, and had my heart set on making Judy’s quilt since I’d first seen it almost a year ago. The day lived up to all I had looked forward to: the peaceful bush setting, a delicious morning tea and lunch and the laughter and good company of other quilters.
In getting started on my Museum Medallion quilt, I was keen to find a large floral for the wide border. Thankfully I was eventually able to locate the one I’d had my eye on from an old French General range, Maison de Garance. And after a trip to Amitie, I had the second of my borders, a lovely slightly textured cotton/linen fabric, Etoffe Imprevue Leaf Stripe by a Japanese designer Yoko Saito for Lecien. 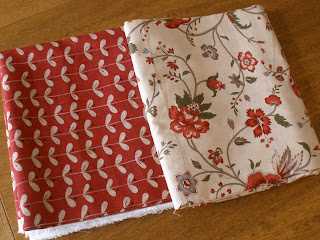 I love a scrappy (not too-co-ordinated) look, so it was fun to raid the shelves of both Amitie and the Treehouse, as well as my humble stash, to come up with a shoebox full of fabrics for piecing. No shortage now. 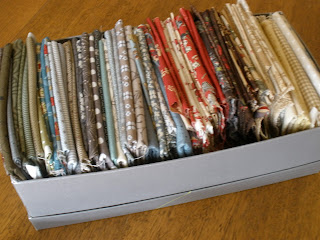 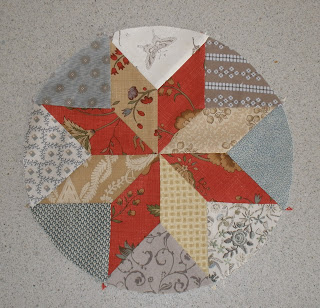 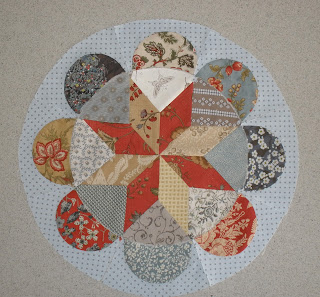 ... the awful realisation that my medallion was taking on an undesirable wavy effect, you can see it in the photo below.In the hope that things might somehow all work out in the end, I continued on adding the triangle border. Unfortunately the problem only became worse, and so eventually I made the difficult but necessary decision to employ the one tool in every quilter's kit that none of us ever want to use - the unpicker! 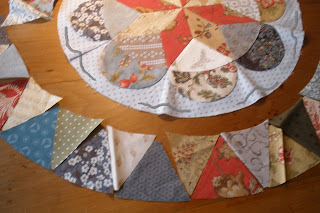 Since retracing the offending template and repeating the semi-circle border more carefully than I did the first time, things have been sailing along pretty well. Today I finished attaching the first of the "squares on point" borders, and am very happy with how it's progressing. I really enjoy handpiecing and though it's very time-consuming, am finding it very therapeutic and relaxing. Here's my quilt so far, photos taken in the garden today. 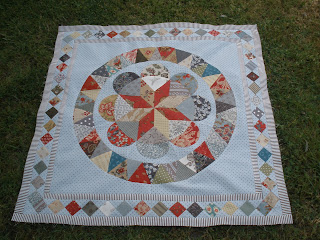 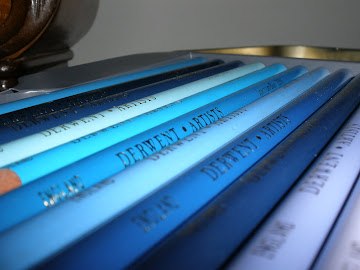 Deb
Mornington Peninsula, Vic, Australia
Now that my children (& husband) are almost grown-up and able to look after themselves, I have a little time to play with colour, fabric and other beautiful things. I’ve created this blog to share treasured objects. I hope you'll be inspired to share some of your treasures too.